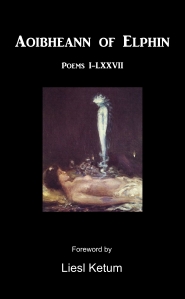 Tapping on the window of the invisible median strip between her inner and outer worlds, Aoibheann Ó hAodha, the poet and mystic known among the Irish townspeople simply as Aoibheann of Elphin (1916-1982), exuberantly wrote about the trials and tribulations, as well as ecstasies and sublimations, of her stretched out consciousness via the ‘crucis’ of life itself. 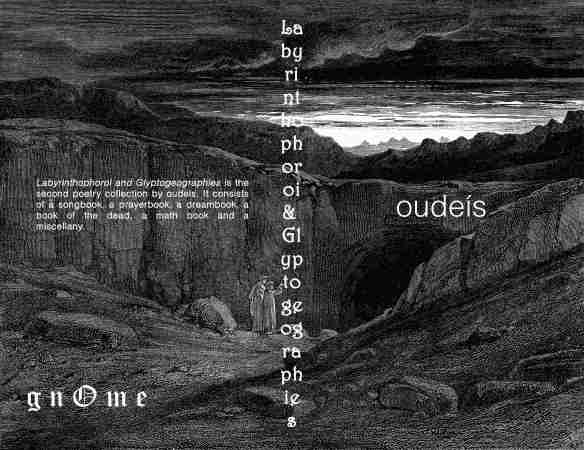 Labyrinthophoroi & Glyptogeographies is the second poetry collection by oudeís. It consists of a songbook, a prayerbook, a dreambook, a book of the dead, a math book and a miscellany. 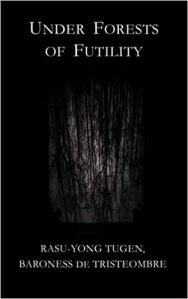 “Vast lattices of black shale engulf us while we sleep. Primordial roots hunch over, as if in prayer. Arching acacia and star pine whisper spectral apprehensions. Black opal rains submerge everything permanent.”

A collection of poems by the author of A Natural History of Seaweed Dreams and Songs from the Black Moon.

“In this book is poetry that evokes the impersonal all around us, and deep within us. It is poetry carefully chiselled from the hues of night.”
— Joao da Cruz e Sousa, author of Notebooks of a Black Swan

“This is not a book for human beings. For every reader will, upon reading it, become lost — blissfully, bewilderingly lost — like a sleep-walker in the black forests of lyric.”
— Comtesse Anna de Noailles, author of A Shadow of Days

“A harrowing testament to the luminous uselessness of poetic language. I wish all language was this haunted.”
— Sadegh Hedayat, author of The Blind Owl 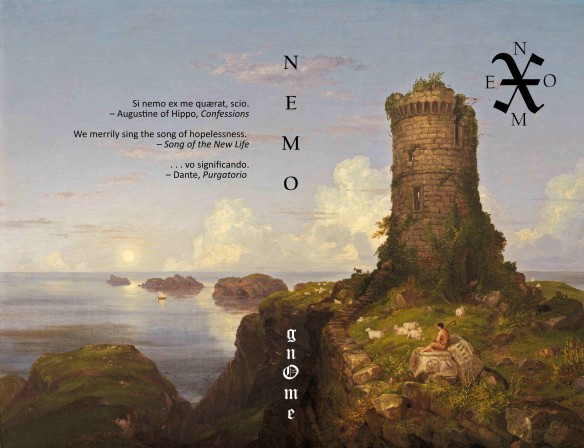 Over a thousand ditties of love and despair.

An interactive grimoire devoted to the sundry incarnations of a self-beheading mantis, Liber Exuvia provides a shadow of insight into its author by way of past-life regressions and encrypted charms. What was once crudely printed and mass-mailed to random households all across the globe—Elytron Frass’s confrontational novella is now bound, barcoded, and available to any daring reader.

Liber Exuvia presents a hypnotic flow of morbid visions of violence and sexuality that sometimes read like Comte De Lautreamont, sometimes like 80s horror cult classics, and, most curiously, often like beautiful lyrical poems, in which the poet is not ‘man speaking to men’ but a conjurer of ghosts.” — Johannes Göransson

“Reading Frass’s work is the taking-in of a great breath and holding it, stretching it to every seam, hallucinating as you beg for air, and falling into a gentle death-lull of captivation. You will travel to another world, many of them. You will leave your body with this book in your hands. You will weep for history, weep for bodies, weep for your planet in the grand scheme of existence. What beauty and terror is conjured here with such absolute innovation of language and form! Frass tells stories, but does so from the inside out, from a dream within a dream, planting you right in the center so you can walk your way out. It is what writing should do.” — Lisa Marie Basile

Lefurgey was a metaphysical wayfarer, a poet-sage who lived his life on the razor’s edge. A walking coincidentia oppositorum, he threw himself full tilt into the Moebius simultaneity of worlds both sacred and profane. Enigmatic and dreamlike, yet not without a recurrent insistence on embodiment, his surreal poems flicker as hot coals do, often flaring between themes of eternity and facticity, body and spirit, love and lovelessness.

“The translation of a poem by February Eglomise had been floating around the island of Montréal during my undergraduate years in that city; it was entitled ‘A Lifebuoy’s Merger’ and had to do with the alchemical process—indeed, it was said to have divulged the great secret of tinctures, and by dint of this many believed the poet to have been a student of Jean-Julien Champagne, a.k.a. Fulcanelli. The original from which ‘A Lifebuoy’s Merger’ had been translated was a document no one could find. It is fitting, then, that a student in anglophone Toronto—at the so-called ‘Divinity School’ (a.k.a.School of ‘Divining-Rods’ qua ‘Plumbing-Techniques’) of Toronto’s Humber College—plumbed the depths of this mystery and discovered that both the name of the poet (February Eglomise) and the name of the poem (‘A Lifebuoy’s Merger’) were anagrams of Ambroise LeFurgey (and of course, vice versa). Mike Tulles, Humber College’s top-notch student of plumbing-techniques, anagrammatized his name and then published his findings under this «nom-de-plumb»—a publication that took the form of the present pseudonymous translation (plus prefatory introduction) of an unanagramatized French poet. In order to disguise his institutional affiliation, he simply added an asterisk-dagger to Humber, creating in so doing Humber† College and its ‘Divinity School’ student Liesl Ketum. Lest it be said that I here break pseudonymies, it should be added that Mike Tulles a.k.a. Liesl Ketum might in fact—in reality—be Ellie Muskt (yet another anagram), and that the latter and all of the former might be the daughter (and/or son) of a certain Maye and Errol, to whose surname another asterisk-dagger was added. The mysteries and mysterious/pseudonymous interconnections go on and on and on. In this space—in the space of these plural/plurifold pseudonymies—let me simply suggest, in fine gnOme_Books fashion, that the translator and translated can be signed (either one) as Space-X.” — Dan Mellamphy

The litany of a parallel, venomous wisdom, The Proverbs of Ashendōn veer from the broken narrative of their initial occlusion, to the lucidity of theologico-literary madness as a new topography of knowledge. As an inverted deity, “Ashendōn comes bearing gifts.”

“Each page herein has a pair of proverbs, each pair apparently procreating further pairs—further proverbial couplings—unto and until the very last one, which understandably stands as a symbol not only of the whole endeavor (The Proverbs of Ashendōn) but also, and all the more so, of these ‘Proverbs’ as ashen ‘Postverbs’: Postmortem/Post«mot» ‘Proverbs’. The Proverbs of Ashendōn are in hindsight—looking back from their last page (Spolier Alert!)—spelled-out, spilled-forth and spoiled to the point of putrefaction, petrification, and pulverized carbonation: a return to, and/or turn into ash. In the end, to quote Beckett’s Endon (morphic mirror of Beckett’s Murphy) or better yet—worse still—to quote the unnamed/unnameable Endon of Beckett’s Endgame, all that the reader will have seen in proceeding through The Proverbs will have been ashes, naught but ashes. In the end, in Ashendōn, nothing but ash: ashen grey, deathly white; the final symbol uniting the (w)hole is the ‘debased cornucopia’ (Ashendōn’s words) of a fitting funereal urn, ‘symbol of the age’. What appeared to be couplings—procreative pairings—were in fact only the ongoing onanism (‘onanistic…repetitive patterns as a kind of fuel’: an ongoing funereal fire) of one already expired, already post-pyre. … On the last page, Godot-like (Note here, now, that there is no need for Spoiler Alerts, since everything is already spoiled), the sole proverb states at last that ‘Ashendōn is coming’—ya viene Ashendōn—but at this point, in this pointed proverb (this singular one following page after page of pairings), it is evident that everything which could have come has already/onanistically come.  All is here/herewith Ashendone.” — Dan Mellamphy

“There is a story of an old wise man who, on a trip to Mount Shasta, wandered into Pluto Cave, a giant lava tube that extends over a mile below ground. He walked deep into the cave, gingerly gliding his fingers against its ashen walls of andesitic lava, his left hand not knowing what his right hand was doing. In a moment of pure perplexity, he soon discovered the small, raised remnants of what felt like braille against his fingers. Upon further inspection, he noticed that they were inverted carvings (like the ones lovers might etch into a tree) from someone writing from the other side of the wall, that is, from inside the ancient rock. The wise man could not read it, so he put his nose up to it and smelled it. It whispered back: ‘205.’ ~ Is that not an odd story? I don’t understand it at all.” — Liesl Ketum, Humbert Divinity School

“The direction of human philosophical development has, for the past thousands of years, mostly been against systems and behaviors that pose an immediate threat to our self-indulgence, both physical and mental. The world from which The Proverbs of Ashendōn arises is a darkly surreal mirror of the world we recognize and live in, in which a fulfillment-seeking human species is snared spider-web like between socialization and total individuation, fastidious materialism and occult speculation, mechanical movement and conscious spirit. In it, humankind is now crossing the dark psychological terrain between every representation of these two poles, taking its writings with it. Ashendōn is the Charon of this crossing. The pages of these Proverbs reverberate with hypomnemata cum anathemata, vague undercurrents, and void-echoed self-suggestions that the current timeline of history is one in which certain eventual discoveries about the human species will reveal some ultimate, true nature or aspect of reality, or some reason or purpose for the existence of everything, an unnamed key to life itself that is given to all humans to understand; but a key that takes the form of a door, to a vast, cryptal librarium of portmanteau coinages and oscillating meanings, of luxuriously worded juxtapositions where the gothic mind and hell-spawned modern thoughts mix, of poetic musings and chaotically pointing typographic arrows. Dually displaying total presence of mind and oracular dementia, The Proverbs of Ashendōn manifests as a backwards/oblivionwards book of hypomnemata, one that implicitly recognizes-slash-solemnizes the protean realities of language, symbols, pictures, and their lost origins in early human history. At the same time, objectivity, cynicism and language all triangulate into words and symbols that are hostilely left to the reader to impart meaning to. All categories, all states of human behavior, sciences, sociolinguistics, events both historic and prehistoric, religions, beliefs, and origins, all are subjects here, as are absence and void. The Proverbs of Ashendōn leaves no stone unshattered.” – oudeís

All books should be as secret, as tenebrous, and as lucid as these titles, which have the insight of negating themselves in the act of their being written and published.